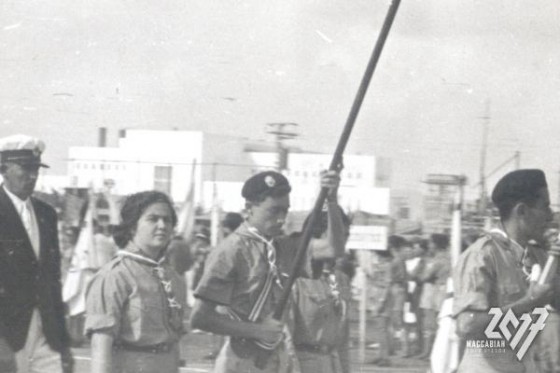 My Father, Shlomo Piyar, was born in Tolmtz, on the border of Galicia.  My mother, Yehudit Gelbord, was born in Bialystok. Both, off course, are from Poland. Both of them came to Israel with the first Maccabiah in 1932. My father competed in swimming & cycling my mom in track & field. They met each other in the Maccabiah through mutual friends. It was big love.
For a Year they hid from the British. Finally they decided not to return to Poland. My father was a great Zionist. A Huge photo album was given to the Tel Aviv Museum.
My father was a member in the Zionist Congress twice, both in Basel and in Argentina, for those who do not know there was a big congress in Argentina at the time.
Eventually they managed to get permission to stay in Eretz Israel, this is the point where they started building their next generation in Israel. By the way, my mother and her brother managed to sail and visit her family in Poland, due of my father's ultimatum that the Land of Israel is their only home.
My dad's families didn't survive Europe except his 2 cousins, who were born to his sister and buried in Ma'ale Ha'Hamish. My mother was able to bring her siblings to Israel and the rest of her family was left in the hands of the Natzies. They both carry heavy sadness throughout their lives.
My father did not speak a foreign language at home – only hebrew. The Israeli flag in Independence Day was always raised proudly in the length of a building.
My Father was a member of "Betar", my mother a member of "Mapai" and my brother members of "HaShomer HaTzair". The debates about Israel lasted until don, every day. There was a great atmosphere, it was an experience, there was a feeling of creation, we had moral and ethical standard at home and we wanted continuing building the Land of Israel.
(Miri Capoon)
We use cookies to ensure that we give you the best experience on our website. Click to find out more or to change your cookie settings.