A Wedding During the Maccabiah

To get you into the spirit of Valentine's day, we wanted to tell you about the wedding which took place in the 17th Maccabiah, amid all the sportive competitions. 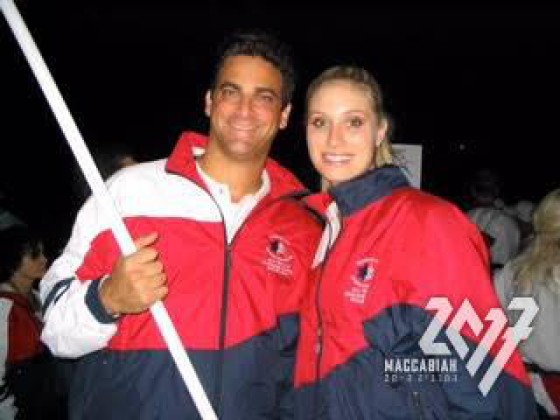 Under the Chuppah stood Jordan and Leslie Schlachter, Baskeballers from the United States. In 2003 Leslie was a prominent basketball player in college, but her Jewish parents have had enough of waiting patiently for grandchildren, and they decided to enroll—and join—their daughter to the Pan American Maccabiah Games, held in Chile that year. "They came to find me a husband," Leslie recounts.
The story about the basketball player whose parents came with her to help her find a husband spread, and one day, one of the players from the American Basketball team approached her and asked where to submit his resume for the position. That man was Jordan Schlachter, and two years later, when the two were members of the American basketball delegation, they decided to hold their ceremony here at the Maccabiah, along with their friends from the teams.
Jordan Schlachter eventually did not go on to become a professional NBA player, but today he serves as the marketing manager of the NBA Players Union, and Leslie is a doctor assistant at the Neurosurgical Department at Mount Sinai Hospital. 12 years have passed since that wedding, and today the two are very happily married, live on the Upper East Side in New York, and are the happy parents of two little children.
In the picture the Schlachter couple in the 2003 Pan American Maccabiah Games, where they met.
We use cookies to ensure that we give you the best experience on our website. Click to find out more or to change your cookie settings.